Travelling – remember that? An archaic PC (Pre-Covid) ritual where individuals went from one place to another, typically over a distance bigger than someone’s living room. I know, I know, dear globetrotter, you’re itching for the day you can travel again.

With the days getting colder and the nights getting longer, leaving the house looks a lot less tempting right now – regardless of us being forced to stay home. And fortunately, with a smartphone, we can travel from our sofa (which is perhaps what most of us do anyway when temperatures drop).

Today I want to bring your attention to a man-made wonder: Stockholm‘s subway system. I recently visited Stockholm’s architecture with my friend and architectural photographer Philipp Heer in collaboration with Visit Sweden and Visit Stockholm. Composed of about one hundred stations, the capital’s underground boasts one of the largest public art networks on the planet – 110 kilometres long to be exact. Over 90 of the 100 subway stations in Stockholm have been decorated with sculptures, mosaics, paintings, installations, engravings, and reliefs by over 150 artists. Its uniqueness (and beauty) have made it an Instagram sensation. However, its appeal began long before Instagram existed.

Art is meant to inspire and educate; challenge and transform; soothe and provoke. Since 1957 artists have played a key role in the making of Stockholm’s subway system, to the extent that it has become a destination rather than a transition space.

Here you have 6 of my favourites. I can’t help to ask myself, what spaces of our daily lives could we meaningfully transform through art? 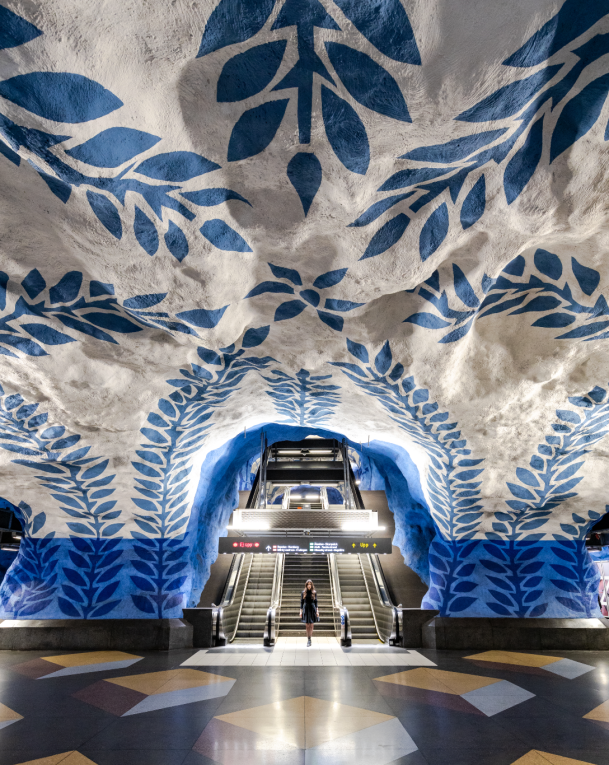 T-Centralen, the main hub of Stockholm’s subway, opened up for traffic in 1957 and was the first station to feature artwork. It didn’t open until 1975 when the blue line to Hjulsta was completed. Painting a platform on the subway’s blue line almost entirely in, well… blue might seem a little on the nose. Artist Per Olof Ultvedt not only chose the blue shades based on their aesthetic values but also their relaxing effect. 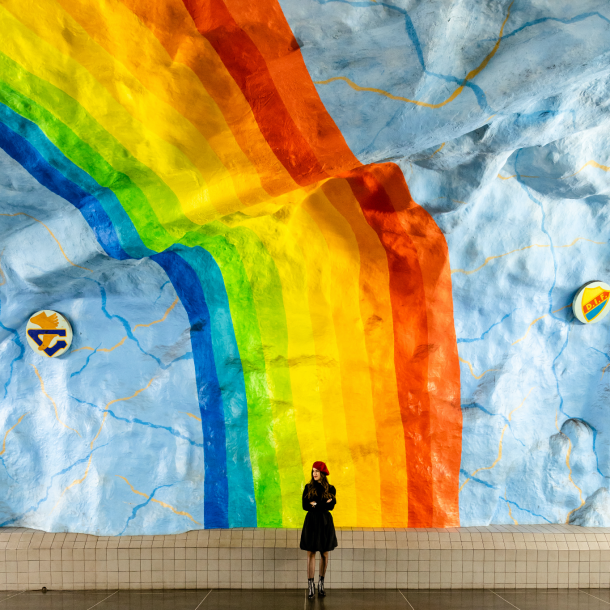 Each year Östermalms IP serves as the main festival area for the Stockholm Pride festival. By coincidence, the nearby subway station, Stadion, happens to have a beautiful rainbow in vivid colors painted against the bright blue of the station’s cave walls to welcome festival goers. The station is one of Stockholm’s first cave stations, a controversial subject when it was built in 1973. Close by is The Stockholm Olympic Stadium, the site for the 1912 Olympics and each year between 1913 and 1965 the Swedish bandy finals.

The station was opened in 1975 and was named after the courthouse above it. The station’s pink color was especially important to Sigvard Olsson. According to him, this hue of pink could be found in the North African Atlas Mountains, and that it should also be found in the mountains below Stockholm Court House. Sigvard Olsson had a very special thought concerning the station’s decoration. He wanted travellers to be able to find traces of things that could previously be found at the scene – fragments of Kungsholmen’s history. If you look closely, you’ll see things that were left behind that have sunken deeper and deeper down the supple earth as years have passed, and which have now turned up down in the cave. The name, roughly meaning ‘The King’s Garden’, is derived from the area’s royal history. Between 1643 and 1825 it was the site of the majestic Makalös Palace, and a beautiful French garden was built. After Makalös burned down, the site was used for military exercises. Finally, in 1875, the park landed in the care of the Stockholm City Council, which in turn opened it for the public. The station is the only place in Northern Europe where the cave-dwelling Lessertia dentichelis-spider can be found. Presumably, the species hitched a ride on equipment and machines travelling from Southern Europe when the station was being built. Kungliga Tekniska Högskolan (KTH Royal Institute of Technology) was founded in 1827 and has since then had famous alumni like Christer Fuglesang, Dolph Lundgren, and Anette Scheibe pass its exams. In 1973 Tekniska Högskolan finally got its own subway station. Unsurprisingly, the award-winning station is a celebration of the scientific advances and discoveries. The most eye-catching are probably the five regular polyhedra located on the platform, each one representing one of Plato’s five elements: fire, water, air, earth, and ether. The station of Solna Centrum opened with the first arm of the blue line in 1975. The bright green and red landscape – the green being the forest and the red an evening sun setting behind the treetops – is both timeless in its beauty, but also something that few other stations artwork is; political. After completing the walls artists Karl-Olov Björk and Anders Åberg felt they were lacking. So they continued adding various details and scenes to the forest. This resulted in pictures that illustrated some of the most debated societal issues in 70’s era Sweden; the environment, over logging of the forest and the depopulation of rural areas.

Check these and other beautiful locations on the map below or download the Free Architecture Guide of Stockholm.